Fans of Tier 1, and wrestling fans everywhere, I am sorry.

I have done a terrible thing.

After hearing Mr. Darius Carter, the current Tier 1 Wresting Champion on the Kick Out at Two Podcast, I got in touch with him to tell him how much I enjoyed the interview and admired his appreciation for wrestling history. I shared with him the books I had written, and I offered to send him a few if he wanted to have a look. Mr. Carter thanked me for the offer and asked for a copy of a biography, Lord Carlton.

Mr. Carter seemed like such a nice man, and he was so gracious to me on email. I had no idea Mr. Carter was one of the most dastardly villains on the East Coast. Now, with the biography of one of the most hated and reviled villains of the 1950s in his possession, I fear I might have only made things worse.

Lord Carlton was a monster. Sure, he dressed nice and conducted himself with the grace of a gentleman, but he as nasty as they came. Like Mr. Carter, Carlton was not a “sports entertainer, nor was he the kind of guy who “wanted to get his spots in.” He believed in winning at any cost, and there was no low too low for him to stoop.

Will Mr. Carter adopt some of Lord Carlton’s dirty deeds as his own? Will he follow Carlton’s lead by traveling to the far east to pick up a sinister Swami to assist him in his conquests? Whatever happens, I take full responsibility.

If you want to see Darius Carter, he’s currently taking the Tier 1 title around the United States on a rampage of destruction. If you want to know more about Lord Carlton and see where Mr. Carter may be headed, you can read about him only in the pages of Lord Carlton: Wrestler, Artist, My Father. 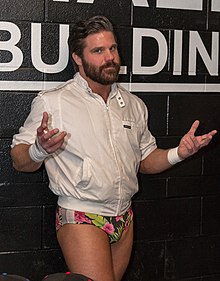 Marc Hauss and I partnered up this past year to produce a six part series called Hauss Show, a sketch comedy show about the life of a professional wrestler. The show is available to watch on Marc’s YouTube channel, and we have ten more already in the works for 2017.

I asked Marc to pick a favorite match from 2017. Here’s what he had to say about the video posted below.

“This was for the IWF heavyweight championship where I finally got my one on one match with Sean Carr. I was awarded the championship after Sean was a no show to  multiple shows. This was the match to show who really was the champ.”

I’m excited to continue working with Marc in 2017, and very excited to see what else he accomplishes in the ring. Happy New Year!

There’s a major star for the WWE, a main event level former world champion, who still gets tickets for at least one promoter who helped him back in the day. He did not work for this promoter very long, but the wrestler has never forgotten the hand up the promoter gave him. He’s not the only one on the main roster who does this, and the local promoter is not the only one receiving a never-ending stream of love and appreciation for what he once did for a star on the rise.

Professional wrestlers do not forget where they came from. They honor their roots every chance they get. They show their gratitude to the men and women who mentored them in words and deeds. They pay it forward as much as they can to other students who came from the same place. They pay homage to the fans, the promoters, the fellow wrestlers, the refs, everyone who helped them along the way.

I used to dabble in the independent film scene. Like the independent wrestling scene, it’s a world filled with dreamers who hope to make it to the big time. The same gratitude that is extended by professional wrestlers toward their past does not always happen in the world of film. The wise ones do, like the former students of Lloyd Kaufman and Roger Corman, but I’ve seen others not only turn their backs on the actors, producers, and directors who once supported them, but actively try to suppress films they now deem as beneath them.

Everyone starts somewhere. Whatever profession you’re in, you started some place. We all have bad matches, bad films, things we know weren’t our best. But suppressing the work of others to satisfy your ego is ungrateful and wrong.

When he was at the height of his run in the WWE, a fan asked CM Punk where he thought Wrestlemania should be. He replied, “The warehouse in Charlestown, Indiana,” the building where he once wrestled Chris Hero for 93 minutes in front of a hardcore-hungry local crowd. That is paying respect. That is remembering who you are and where you came from.

I don’t care what opportunity lies ahead in your career. There’s no excuse for stepping on the people who were there for you before your “big break.” Remember the people who believed in you when no one else did. Remember those who were there to help you, to give you a role when no one else would, to give you an opportunity to do what you wanted to do. Be grateful. Be humble. And be willing to pass it on.

If you never had the pleasure of seeing The Lovely Lylah, aka the Powerhouse Princess, in action, I feel sorry for you. Not only did you miss a powerhouse talent in the ring, you also missed out on the amazing sweet treats this talented lady often sold at her gimmick table. From cake pops to cupcakes to cookies, Lylah makes something to suit every sweet tooth, and today, she was kind enough to share one of her favorite recipes with us.

Lodgerdoodles are a variant on snickerdoodles and a favorite treat of a certain NXT signee formerly known as Crazy Mary Dobson. Lylah made these all the time for Crazy Mary when they were both working out of Louisville, and this recipe was actually a Christmas gift for all of Lylah’s friends a few years ago. I’ve got one in my house who likes snickerdoodles as well, so you better believe I’ll be giving this one a shot myself.

Mix the sugar and cinnamon together in a small bowl. Set aside for the last step.

Mix the cake mix, eggs, and oil until the dough comes together. Shape the dough into one inch balls and roll in the cinnamon sugar mixture to coat.

Place 2 inches apart on a nonstick cookie sheet or a cookie sheet covered in parchment or aluminum foil so they won’t stick.

Sad to say a series of car accidents and resulting health issues have forced Lylah into retirement from the ring. She’s a great lady who had some tough breaks, and I wish her nothing but the best!

With over 50+ episodes released, the Kick Out at Two has yet to have a female guest. That changes in a big way starting this week in what Bonnaroo Brittany has declared to be, “No Guys November.”

Their first guest this month is a great one too. Kelly Klein was one of my first interviews here on Eat Sleep Wrestle, and she’s gone on to become one of the driving forces for ROH’s Women of Honor division.

Kelly is the total package: an athletic woman with a solid work ethic and a an incredible mind for the business. She’s been trained by the very best, and it shows in everything she does in the ring. Kelly is a true star and a name you need to know.

Listen to Kelly and the gang by downloading the podcast from iTunes of Soundcloud. And if you like the show, pick up a T-shirt. The new design (see below) is now available on Teespring.

If you’ve only seen Marc Hauss in the Hauss Show videos, prepare to see him in action.

Marc just released a terrific hype video that’s getting a lot of play on social media. Wrestlers take note: this is a great way to get noticed.

Give it a look below. If the action won’t get you, the Danny Tanner knee pad will!

Full disclosure: I’m a CHIKARA fan. I have been since I interviewed Mike Quackenbush and profiled the promotion in the book Eat Sleep Wrestle. I love the gimmicks. I love the insanity. I love the masks. I love the creativity.

And yes, I’m a paid subscriber to CHIKARAtopia.

CHIKARA’s looking for help from their fans and fans of wrestling games. They’re developing a CHIKARA themed video game, and they’ve just launched an Indiegogo campaign to make it a reality. They’ve got some really nice incentives for supporters, including T-shirts, copies of the game, and subscriptions to CHIKARAtopia.

Click play to see the preview below. Then go to Indiegogo to support their campaign!