Every now and then you go to a show and see a new wrestler who make you sit up and take notice. That happened a month ago when I saw Madi Maxx for the first time. She came into the Jeffersonville Arena as a complete unknown to the Girl Fight crowd. Forty-five seconds after picking up a mic, every fan in the building wanted to slap the “Paris Hilton of professional wrestling” in the face.

Madi was just eight years old when she decided what she wanted to do with her life. That was when he father took her to Monday Night Raw for the first time.”I had never before seen or heard of WWE, or any wrestling for that matter. I instantly fell in love with everything about it. The emotion, the characters, the show, the energy, literally everything. I knew after that I wanted to get the same response from an audience and I started doing moves off my dressers, on to my pillows, and even my friends when they let me!

As a child of the Attitude era, Madi was drawn to some of its brightest stars, including Lita and Edge. “They were my wrestling heroes. I wanted to be just like them. They were also the ones who influenced me the most, along with The Hardys. I was drawn to them because they were all so different than anyone else on the roster. They created such a response from the crowd and filled arenas with energy! Everything they did I was infatuated by everything they did!”

Although Madi’s parents bore some of the responsibility for her infatuation with professional wrestling, they didn’t expect it to last. Madi never wavered in her dream, and when she was seventeen, she took her first steps towards pursuing that dream. “I was home during the summer, and I decided spontaneously I am going to do this NOW! I contacted a school, USIWF, and I called my mom once I got a response. Her and my dad both came with me to my first day and made sure I really wanted to do this. They have been supportive ever since, and have never once doubted me or tried to talk me out of it.”

Madi trained with Josh Gerry at USIWF for a year and a half. She then moved to Louisville, Kentucky and began training at Ohio Valley Wrestling with Matt Cappotelli and Rip Rogers. While in Louisville, she captured the OVW Women’s Championship. “It was incredible! I went to OVW with one mission, and it was to put my name on the list with all the other Women Champions, including Beth Phoenix! Holding the same title she held was something I will always remember and cherish.”

Madi’s determination to make her mark on the business led her to High Spots in Charlotte, North Carolina, where she now trains with a number of other hopefuls. She’s already faced some stiff competition in Nicole Pain and LuFisto and is scheduled to face Taeler Hendrix and Chelsea Greene in the coming months. She has her eyes set on Queens of Combat in 2018, and she hopes to make her West Coast and International debuts this year.

Madi has the skills to become a top star, both on the mic and in the ring. What’s more, she’s a true student of the game who absorbs as much as she can from everyone she meets.

“The lessons I have learned that are the most important to me are, ‘crawl, walk, run,’ which my first coach taught me. Meaning you can’t learn everything in a day, you have to stick with it and really give it your all! The second is, ‘trust no one,’ which is a really big one that I have kept in mind wherever I go.”

Madi listed LuFisto as one of her favorite opponents. You can see the two of them in action in the video below. You can also follow her on Twitter @madi_maxx, Instagram @maxxmadi, and Facebook. 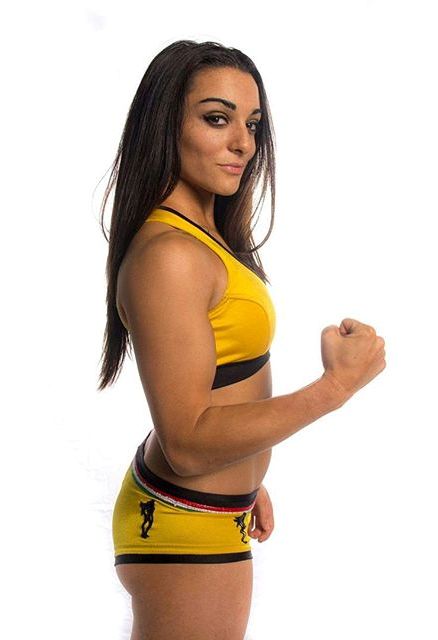