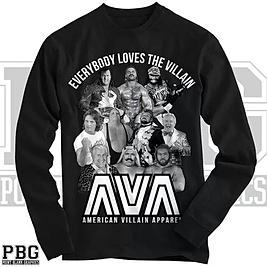 This is hands down the coolest wrestling shirt I have ever seen. I bought one back in December and had it mailed to my wife so she could wrap it up for my birthday.

If you want one, you can get one through my buddy Marc Hauss. Marc is an independent wrestler who is currently out of action due to a recent knee surgery. He’s already on the mend, working hard to come back stronger than ever. In the mean time, he’s having to rely sources of income other than wrestling to hold him over.

Marc just built a new website and released several new shirts, all designed by his sponsor American Villain Apparel. If you’re a fan of Marc, or of indy wrestling, or really cool wrestling shirts, click here to pay Marc’s website a visit and do a little shopping. 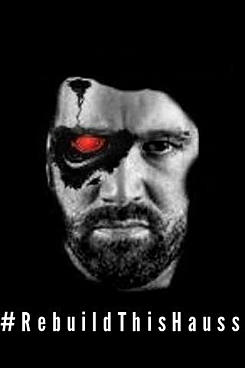 And yes, if you have to have it, the wrestling villains shirt is still available!

Cancer sucks. While there are many wrestling fans (myself included) who can appreciate and cheer for a great heel, Cancer is one heel that will never, ever get cheers. Ever.

Tim Donst is a great guy and a heck of a wrestler. My heart goes out to him and the struggle he faces ahead. Tim is strong, and I know the whole indy wrestling community, fans and workers, are behind him. Click here for an article about Tim on poconorecord.com to bring you up to speed on his story. Huge props to him for making the best of the situation and doing what he can to brighten the lives of younger cancer patients.

Here’s hoping Tim’s story has a positive outcome like that of another indy wrestler, Matt Cappotelli. Cappotelli was days away from a WWE shot when he got his diagnosis. The Southeast Outlook has a story on him this week. Click here to read about Matt.

All the best to Tim Donst for a speedy treatment and recovery. Would love to see both of these men get back in the ring one day.

When I was writing Eat Sleep Wrestle, I knew I was creating a time capsule. What’s written in the pages of that book is a moment of time, now past, depicting the lives of a number of modern day independent wrestlers. No sooner was the book released, the lives and careers of the men and women profiled inside began to change. Since Eat Sleep Wrestle was printed:

Michael Hayes left OVW and seems to have retired.

Marc Hauss was laid up after surgery. (Get well, sir!)

Colt Cabana blew up the internet and got sued along with his pal CM Punk.

Ron Mathis managed to accumulate four title belts at once.

Crazy Mary Dobson got a speaking role on Raw. “You are chips!”

At least four wrestlers – Crazy Mary, Lylah, Aaron Williams, and LuFisto – applied for the next season of WWE’s Tough Enough.

If you’re scratching your head wondering who these people are, grab a copy of Eat Sleep Wrestle to get up to speed. Then get out to an independent wrestling show to see what you’re missing.

A few days ago a video went viral showing wrestler Chris Dickinson tossing female wrestler Kimber Lee around the ring like a rag doll. I’m not going to post it here; you can Google it if you haven’t seen it. While a close look at the video shows you that the moves were delivered in a safe manner to protect Lee, it is a brutal and violent video.

I was very happy to see LuFisto’s response to this video go viral as well. LuFisto didn’t judge, but as a long time veteran who has taken her share of violent, inter-gender bumps, she asks some very important questions that all indy wrestlers – male and female – need to ask themselves.

You can read LuFisto’s comments here, and if you are an aspiring wrestler, I strongly suggest you not only read them, but really think about what she has to say.

While I’m at it, let me add to the chorus of those responding to LuFisto’s lament about never making it to the WWE. LuFisto is everything that is right about today’s indy wrestling. She is a class act who loves her fans and never disappoints in the ring. She makes those she works with better, and no matter who’s on the card above or below her, she is always one of the most memorable matches of the night.

I’ve seen LuFisto live twice in the last year. She tore the house down against Crazy Mary Dobson and Lylah Lodge. There were at least five or six other matches on the cards both nights, but I’d be doing well to tell you who was in more than one or two of those other matches.

Success can be defined in many ways. Making it to the WWE is one definition, but can you really call it success when you go from stealing the show in the indies to being in an eight-diva tag match that lasts three minutes? The brawls LuFisto, Crazy Mary, and Lylah put on here in Southern Indiana over the last year were far better than any televised “Diva” match in the last five. (NXT excluded.)

When LuFisto hangs her boots up for the last time, no one who truly love pro wrestling will look at her career as a failure. I’ve enjoyed getting to know her in the ring and out, and it was my honor to feature her in Eat Sleep Wrestle. She’s created an incredible legacy for herself and despite all her self-doubts, pains, and frustrations, she’s showing no sign of giving up just yet. That’s a win for her and for everyone who enjoys real wrestling.

Shane Helms put it best when he responded to her earlier this week. “Someone find LuFisto and tell her that’s she’s absolutely wrong about one thing. She’s not a failure. She’s a f’n badass!” High praise, and well deserved.

The first time I saw Ryan Howe was the night after Wrestlemania XXVII. He was the first of the new round of Tough Enough contestants to introduce himself to a Raw crowd that chanted for Stone Cold Steve Austin to “Stun them all!”

I saw him again almost two years later at OVW, the night I started work on Bluegrass Brawlers. He didn’t wrestle that night, but I saw him a few times over the next couple of years. He had a great look, and he showed potential, but he was always in the mid-card, working underneath guys like Rob Terry and Jamin Olivencia. He was better each time I saw him, but he was always outshined by the main event players.

Wednesday night, I saw him again. He worked the main event against OVW champion Mohamed Ali Vaez. This was a completely different Ryan Howe than I had ever seen before. Same look, same gimmick, but there was a confidence and a swagger about him I hadn’t seen before. Howe looked like he belonged in that main event. He looked ready for the next step. If history is any indication at OVW, he’ll probably get it sooner rather than later.

OVW just launched an Indiegogo campaign to upgrade their television equipment. OVW is the longest running wrestling television program in America outside of WWE (over 800 episodes!), and they’re ready to step it up and go HD. This campaign will allow them to upgrade their studio, their cameras, and their editing equipment so they can continue to produce a top quality program while providing the best training for the business, from inside the ring to the editing room.

OVW television airs locally in Louisville, but it’s also available to view online. OVW alums have shared with me how fans have come up to them in airports and venues around the country, fans who know them only from watching online. Most recently, OVW announcer Dean Hill told me he was approached by a fan in Seattle, Washington who watched OVW on TV!

Independent wrestling is growing in popularity once more, and OVW is positioning itself to take advantage of the changing tides. Check out the campaign on Indiegogo and the perks that are available – including and opportunity to train at the school. And by all means go to www.ovwrestling.com to check out their show for yourself!

Mad Man Pondo’s not the man he used to be. He’s two sizes smaller. The death match legend is in the best shape of his life. He’s lost a ton of weight by cutting out junk and walking every day.

Crazy Mary Dobson has a lot to do with Pondo’s transformation. The two of them recently shared a recipe on Facebook, and this morning I tried it on my family. Everyone, and I mean EVERYone, loved it.

These pancakes call for only two ingredients: bananas and eggs. You mash the bananas, mix in the eggs, and then cook them like pancakes. One banana for every two eggs is the ideal mix (though I used 4 bananas to 6 eggs this morning). Three bananas and six eggs will make about 20 pancakes. I worked up a rough estimate using the Calorie Count app and ball parked the calories at 40 per pancake.

You can top them with syrup. You can fill them with nuts, blueberries, chocolate chips, or anything else you’d put in a pancake.

Thanks to Pondo and Mary for sharing (and inspiring my own weight loss). Twenty six pounds down, and counting for me.

First of all… let’s not get so upset we overlook the good.

We got a terrific title match, arguably the best triple threat of all time. And they made a legitimate main event star last night. His name is Seth Rollins.

That said, many people are beyond disgruntled today, and many have gone so far as to cancel their WWE Network subscriptions.

Eat Sleep Wrestle is a great place to start exploring wrestling beyond the WWE. After I released Bluegrass Brawlers, I went out to some indy shows to sell the book. I had the opportunity to meet some of the Midwest’s finest indy talent, and I saw some amazing matches. I was so inspired by them, I had to tell their story.

These are not superstars. These are wrestlers. The people profiled in Eat Sleep Wrestle are passionate, driven people who work as hard or harder than anyone you’ll see on Monday Night (tonight excepted, of course).

Eat Sleep Wrestle will introduce you to people like Mad Man Pondo, Chris Hero, Crazy Mary Dobson, Aaron Williams, Ron Mathis, Hy Zaya, Jamin Olivencia, Zodiak, Mickie Knuckles, Cherry Bomb, and Reed Bentley. It will make you realize there is wrestling beyond the WWE, and it will inspire you to follow your own dreams.

Yes, this is a shameless plug, but Raw isn’t live tonight, and you can get it on Kindle or Nook, why not give Eat Sleep Wrestle a try?

Kickstarters have been funded with more money in far less time.