It’s been nearly twenty years since Jesse “The Body” Ventura was elected governor of the state of Minnesota. Since that time, wrestling fans have wondered when a professional wrestler would make a run for the nation’s highest office. Donald Trump may be a WWE Hall of Famer, but he hardly qualifies. And even if he did, he would be over 150 years too late to be the first wrestling superstar elected to the nation’s highest office. That honor belongs to a Kentucky-born attorney who made a name for himself as a grappler in the 1830s. His name is Abraham Lincoln. 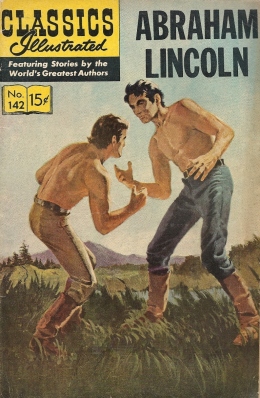 Lincoln was born on February 12, 1809 in a log cabin in Hardin County, Kentucky. Kentucky loves to boast of its Lincoln connection, as does Indiana, where young Lincoln spent much of his boyhood. In 1830 Lincoln left his father’s household to strike out on his own, landing in New Salem, Illinois. He went to work for a man named Denton Offutt, a local merchant. Together with a few other young men, Lincoln traveled by flatboat to new Orleans to sell some goods for his employer. It was there that Lincoln first witnessed the evils of slavery, an institution he fight against in his later years when he entered politics.

It was during his employment for Denton Offutt that Lincoln became known as a wrestler. Offutt loved to boast of the strength and athleticism of his young employee. Standing at 6’4”, Lincoln was very tall compared to other men of the day. Had he lived in our time, it’s likely he would have grown to be 6’10”, giving him the size that Vince McMahon craves in his top stars.

Lincoln could not only walk the walk, he could talk the talk. A first person account of the time records that Lincoln once dispatched a would-be challenger with a single toss. After subduing his opponent, Lincoln called out to those watching, “Any of you want to try it, come and wet yet horns!” The challenge went unanswered, and Lincoln left the scene standing tall.

Lincoln’s most legendary moment came when he faced off with a young man named Jack Armstrong. Armstrong was the leader of a local gang in New Salem known as the Clary’s Grove Boys. The Boys were trouble makers known for nailing guys inside of wooden barrels and rolling them down hills. They were natural heels, the kind of men an audience would pay heavily to see brought down a peg or two.

Armstrong goaded Lincoln into a face off, and the two locked horns in the streets of New Salem. Armstrong underestimated his lanky foe, and when he discovered just how strong Lincoln was, he turned dirty. He started kicking and stomping Lincoln out of frustration. Lincoln snapped. He grabbed Armstrong around the collar and began shaking him like a rag doll. Lincoln tossed Armstrong a few times and left him lying unconscious in the dirt.

Some accounts say that the confrontation led to a truce between the two men. Armstrong was impressed and humbled by Lincoln, and the two were friends from that day forward.

The match also enhanced Lincoln’s reputation as a wrestler and as a man, and when Lincoln ran for office later in life, that reputation proved to be a major selling point for the voters of Illinois. These frontier voters loved a man who could stand on his own two feet, and in their eyes a man who wrestle would fight for them in Congress.

Lincoln’s chief political rival Stephen Douglas even spoke about Lincoln’s wrestling skills. Douglas would often praise Lincoln’s strength and skill as a grappler before going on to attack his positions on slavery and state’s rights. Douglas, like Armstrong before him, would ultimately lose to Lincoln, but unlike Armstrong, Douglas did not suffer the indignity of being shaken like a rag doll.

Lincoln was elected President during a very turbulent time in American history. He was the first man to run as a candidate for the Republican party, and it was the issues of the day that carried him to victory. That said, it would be a mistake to assume his past had nothing to do with his popularity. Like so many politicians before and after him, Lincoln’s celebrity, chiefly as a wrestler, earned him more than a few votes on election day.

Lincoln is remembered best for keeping the Union together while emancipating the slaves, but pro wrestling also owes a debt to Lincoln. Lincoln wrestled over 300 matches before trading grappling for politics. He was ahead of his time as a wrestler and a trash talker. He also broke ground for men like Jesse Ventura, Antonio Inoki, and The Great Sasuke, wrestlers who would use their fame to run for office.

After his death in 1865, Lincoln’s friends and biographers went to great lengths to make sure his legacy stayed strong. As with many early American figures, some of the stories of Lincoln were exaggerated to the point of becoming tall tales. Hard to believe, I know, but it is at least possible some of the stories of Lincoln’s wrestling prowess might have been stretched. Still, his reputation as a grappler was enough to earn him the highest honor afforded a pro wrestler. In 1992 Abraham Lincoln was inducted into the National Wrestling Hall of Fame.

Although the induction came 127 years after his death, and although he is rightly remembered more for his tenure as President of the United States, one can’t help but feel Lincoln would have been honored.